Shoppers have stopped hoarding and instead are bunkering down with sharp falls in spending across the board with Victorian and NSW consumers snapping their wallets tight.

Figures compiled by the Commonwealth Bank based on its extensive credit and debit card network suggests the combination of coronavirus-linked shutdowns and early hoarding is now hitting the entire retail sector.

In the week to April 10, spending on clothing is now 58 per cent lower than for the same time last year. Transport spending (44 per cent), personal care and beauty products (61 per cent) and recreation (37 per cent) have also recorded huge falls. 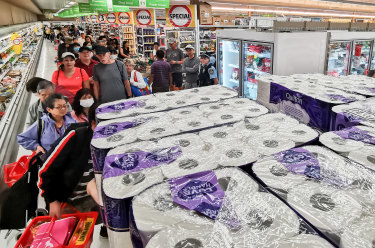 Hoarding appears to be coming to an end as consumers bunker down and slash spending altogether.CREDIT:AAP

While there's been a 23 per cent lift in sales through bottle shops, this has not been enough to offset a 72 per cent collapse in spending through hotels, pubs and bars.

To the end of March 27, total alcohol sales were 34 per cent ahead of the same period last year. They are now down by 13 per cent.

CBA senior economist Gareth Aird said there were clear signs the immediate fallout of virus-related closures was spreading across the economy.

"Our data indicates that some areas of household expenditure which are not directly impacted by the government imposed shutdown are now being adversely affected," he said.

This includes medical services with spending in this sector now starting to fall.

While household furnishings and equipment, such as new freezers and home office goods, are still up 10 per cent on the same time last year, the huge growth evident in early March is now coming to an end.

Food goods, mostly sold through supermarkets, are up 28 per cent on the same time last year. In mid-March, it was up 40 per cent.

But food services, covering restaurants and cafes, is now down by 38 per cent. 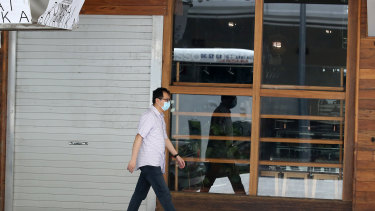 Spending through the nation's restaurants has fallen 38 per cent on the same time last year, according to the Commonwealth Bank.CREDIT:GETTY IMAGES/JONO SEARLE

Across the country, the biggest falls in spending are in Victoria and NSW with drops of almost 15 per cent on the same period last year. The two account for more than half of all consumer spending.

Spending in Queensland, Western Australia and South Australia is down around 8 per cent, in the ACT it is down almost 15 per cent while in Tasmania it is down by a modest 1 per cent.

In-store shopping has fallen by more than 25 per cent but even online spending is now negative, down almost 7 per cent.

Mr Aird said with shutdowns likely to continue through the current June quarter, there was little chance of a lift any time soon.

“Despite the incredible fiscal and monetary policy packages, we do not expect to see a rebound in our spending data for the foreseeable future," he said.

"It is simply not possible for households to spend on a range of goods and services when the businesses that provide them are shut.

"In addition, the appetite to spend on some goods and services has abated as households seek to avoid face to face interaction where possible.”